Building an RF Testbed for your Lab

Optimize the real-world performance of your device or network

How to build a Wi-Fi or 5G RF Testbed 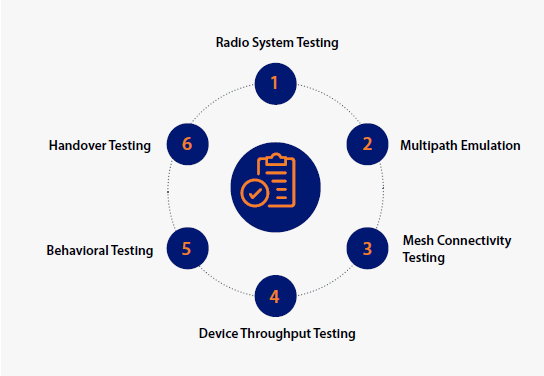 Building an RF Testbed for your Lab

Throughput – tests the manner in which a physical system acts or functions under specified conditions is the most common performance test, but there are many other important tests for example voice and other real-time transmission such as video conferencing and gaming command stringent tests regarding packet error rate and jitter. Access point testing involves validating forwarding rate and capacity.

In response to this need APITech has designed a portfolio of six blueprint Testbeds for 5G and Wi-Fi 6 covering:

Use case I: Throughput Testing

A simple RF Testbed designed to allow for the testing of the throughput of a number of wireless devices (5G and Wi-Fi) at various transmit and receive power levels. This RF conductive test setup emulates an indoor Wi-Fi environment, with a Wi-Fi Access Point and multiple user devices. The RF Testbed can adapt to testing any other wireless technologies such as 5G, LTE, Bluetooth, Zigbee, etc. as well.

This Testbed utilizes APITech’s multi-channel programmable attenuators to simulate the fading loss between the access point and the user devices. Each programmable attenuator can be programmed continually step to different values in a sequence, or even step between random values, replicating signal loss in a wireless environment.

The APITech Butler Matrix enables the user to connect multiple access points to multiple user devices and provide an optimal channel condition to the devices under test. This RF Testbed comes with APITech’s digital Lab assistant to help manage test automation for “out of the box,” testing of device performance.

An RF Testbed for the certification of wireless radios. This RF conductive test setup emulates an outdoor LTE/5G wireless environment, with a 5G/LTE Radio and user devices or a UE simulator. Radio Certification testing can be broken down into a number of subtests as follows:

The radios under test connect to High Power attenuators, then into a programmable attenuator and switch. Finally, the signal routes to a commercial UE emulator. The high-power attenuator allows the user to independently power down the power level of the High-power 5G/LTE Radios. Each programmable attenuator can be programmed to continually step to different values in a sequence, or even step between random values, replicating signal loss in a wireless environment.

With the addition of APITech Smart Power Distribution Subsystem, a full lights out lab that enables both RF testing and power control of the test platform and connected devices under test is created.

A Testbed that allows the user to perform conductive, controlled, over-the-air device testing. The key element of this Testbed is APITech’s Butler Matrix, enabling the connection of multiple radios to a single antenna. A butler matrix ideally produces a channel condition number of 1, maximizing throughput. This enables the butler matrix to deliver a dissimilar number of channels and antennas to be connected.

This RF Testbed comes with APITech’s digital Lab assistant to help manage test automation for this type of testing “out of the box,” without any internal ATE development.

From a technical perspective, the RF architecture in 5G and Wi-Fi 6E devices and the higher frequencies being used will require hybrid Testbeds combining conductive & Over-the-Air testing as there will not be any physical connectors available in the devices. This test platform supports three OTA testing methodologies approved by 3GPP for conformance testing.

A Testbed that accurately models multipath in a Wi-Fi environment with a power delay path matching the IEEE TG-n channel model. It supports class B(indoor) NLOS and LOS models, along with class D(outdoor) NLOS operation.

The broadband nature of APITech’s multipath emulator enables the tester to run multichannel system tests and evaluate automated channel allocation models. Something that would be impossible using a traditional fader test system, which only supports one channel at a time.

A RF Testbed that allows for the handover testing of wireless radios. Handover testing verifies that the device is able to switch between different cellular radios or Wi-Fi access points without dropping its overall connection.

This RF conductive test setup emulates an outdoor LTE/5G wireless environment, with a 5G/LTE Radio and user devices. This RF Testbed can adapted for testing any other wireless technologies such as Wi-Fi, Bluetooth, Zigbee, etc. The radios under test are connected to power dividers/combiners, then into multi-channel programmable attenuators. Finally the signal is routed to a number of user-devices. Motion can be emulated by ramping the attenuators to introduce signal fading loss verses time. The ramping rate can be accurately controlled to emulate the velocity of motion.

Each programmable attenuator can be programmed continually step to different values in a sequence, or even step between random values, replicating signal loss in a wireless environment.

Designed to emulate a multi node mesh RF network with a conductive RF Testbed enables you to:

This RF Testbed comes with APITech’s digital Lab assistant to help manage test automation for “out of the box” testing of mesh network performance:

APITech is the Electromagnetic Spectrum Innovator

APITech has over 60 years of wireless device and system innovation, development, and design heritage. We offer the most comprehensive wireless test and measurement systems development of any organization. And we are experts in RF, microwave, and millimeter-wave technologies.